TOKYO: Former Japanese prime minister Shinzo Abe died of his injuries on Friday (Jul 8) after he was shot while campaigning for a parliamentary election. 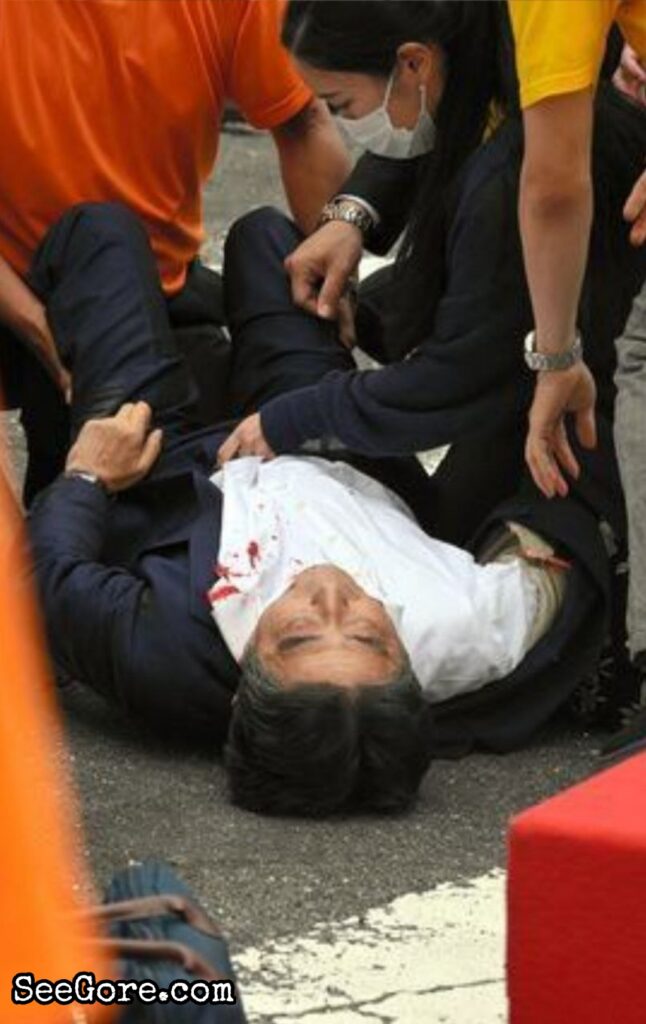 “Shinzo Abe was transported to (the hospital) at 12.20pm. He was in a state of cardiac arrest upon arrival,” said Hidetada Fukushima, professor of emergency medicine at Nara Medical University hospital.

“Resuscitation was administered. However, unfortunately he died at 5.03pm,” he told reporters.

Abe was flown to hospital by helicopter after a shooter opened fire while the former prime minister was delivering a campaign speech in the western region of Nara.

But he was already showing no vital signs by the time he reached the hospital, with bullet wounds to the neck and chest. One bullet appeared to have entered through his left shoulder.

The former prime minister’s wife Akie Abe arrived at the hospital earlier on Friday afternoon and Fukushima said the family had been informed of Abe’s death.

bozo thought he could return

yep he got fucked fr, he shouldnt have returned.

TF was the securit doing ?

japanese are not used to crimes like west is, last time I heard about any japanese killer, that was light yagami

He is a god wdym

the w
Reply to  hehe

hehe
Reply to  the w

Human being
Reply to  hehe

that’s why they did so many crimes with the Koreans just a few decades ago? Lmao I see the irony

The Opsec on this was fucking TERRIBLE. How the hell was no one facing the opposite direction, they could’ve easily stopped this.

someone using “bozo” should not be capable of breathing the oxygen we all share, please cut your oxygen tank imediately. thank you. bozo.

Lol bozo getting mad in replies

Love self irony, absolutely adore it.

tbf if someone’s breathing from an oxygen tank, they’re NOT breathing the oxygen we all share.

Bro the Japanese minister told these anime faggot lovers to go outside and touch grass and then they shot them for it, how could you not miss somebody like that, he was a hero

Maybe do your research before saying dumb shit the guy that killed him did it because he was involved in a fucked up cult. Besides that he’s done tons of fucked up shit like defending Japan’s ww2 war crimes while his grandfather was the economic manager of Manchukou and a war criminal

He would later apologize and openly acknowledge his government’s transgressions throughout the Pacific Theatre. That was when the animosity towards him from the Japanese nationalists really started.

Human being
Reply to  Murphy’s law

Honestly he pushed for war and he just had a taste of what war is like.

Man when I saw this on the news, I thought it was the Chinese premier and got exited

Rest assured, that will not happen in China

I think he is ok

Bruh, what gun was this guy using? A fucking cannon or what

I think it was a homemade 12 gauge

Damn, he did that with homemade gun

I just wanted to point out the badass that placed himself between the shooter and the victim. He swatted his briefcase type thing at it too. The first shot got his attention, but he seriously was sacrificing himself against the second one. Too bad he failed.

It was probably a briefcase that doubles as a ballistic shield. They are often used by bodyguards and the secret service for these kinds of situations. They are kevlar-lined and designed to open out to give more coverage but it seems that he had trouble opening it in this case. 🙁 Dear GOD/GODS and/or anyone else who can HELP ME (e.g. TIME TRAVELERS or MEMBERS OF SUPER-INTELLIGENT ALIEN CIVILIZATIONS): The next time I wake up, please change my physical form to that of FINN MCMILLAN formerly of SOUTH NEW BRIGHTON at 8 YEARS OLD and keep it that way FOREVER.… Read more »

Why is the last article so funny to me for no reason..

What a legend he was. Man who had a critical role in the formation of QUAD.

It is all STAGED kid, damn idiot

so its fake bro?

ADD BRO! thanks for spreading truth!

who here likes dudes too

Human being
Reply to  Mnhtun2909

for killing Koreans, Chinese, and millions of South East Asians? He died pretty peacefully for what he has done when he was alive lmao

hehe
Reply to  Human being

your books are incorrect son,Abe was not the leader of imperial japan.

But the NEET nation would have none of it.

wtf isnt coming a ww 3 of that

Man got the rust gun pulled on him

security is a bunch of virgins

don’t tell a weeb to stop watching anime and have sex. worst mistake of my life

How the fuck can you dodge a bullet dumbass?

BY DODGING IT IDIOT

So your gonna be able to dodge a 800-2100MPH Speeding bullet? You think you can? Put a pistol to your head, pull the trigger and see if you can dodge it.

Human being
Reply to  Just a random stranger

some people can catch it with teeth

Tbh this shows no matter how much you restrict guns people will still find a way to commit shootings. Bro built a whole steampunk shotgun straight out of a movie just to assassinate this guy

You know they’re not used to gun violence judging by how long it took them to react to the first shot.

He deserved it because his eyes are slanted lol. Fucking rice eating gook

WHAT THE FUCK THIS SHIT

If the idiot would have ran the first time he might have gotten away.

he got schmacked with a doohickey. yall should find the shit he got shot with

No more anime 4 u lol

Back to
log in
wpDiscuz
76
0
Would love your thoughts, please comment.x
()
x
| Reply