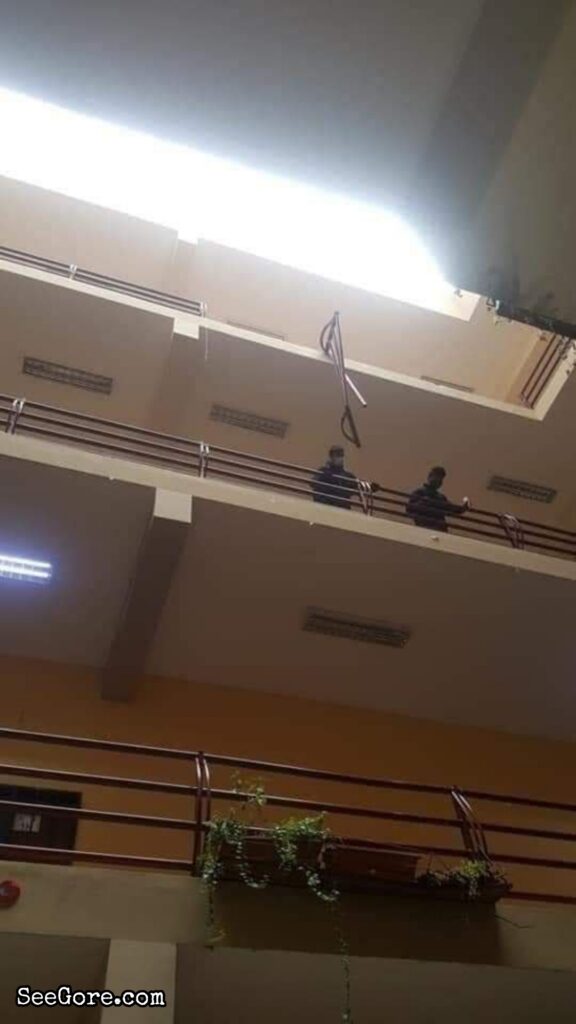 March 2021 – Video footage has captured the tragic moment when students thronging the fourth floor balcony of a university in Bolivia plummeted to their deaths after the railing gave way.

Seven students were killed and five others injured at the Public University of El Alto, second-largest city in Bolivia. The incident occurred as dozens of students crammed onto the balcony to enter a lecture hall for an assembly on Tuesday.

The disturbing video footage, captured by a bystander moment before the students fell, shows them jostling while leaning against the railing which collapsed due to the pressure of the crowd. A number of them then went crashing down to the concrete floor while a few were pulled up by those still on the balcony.

A student in blue jacket was saved by other students as she dangled upside down as her colleagues grab her shoes to rescue her. 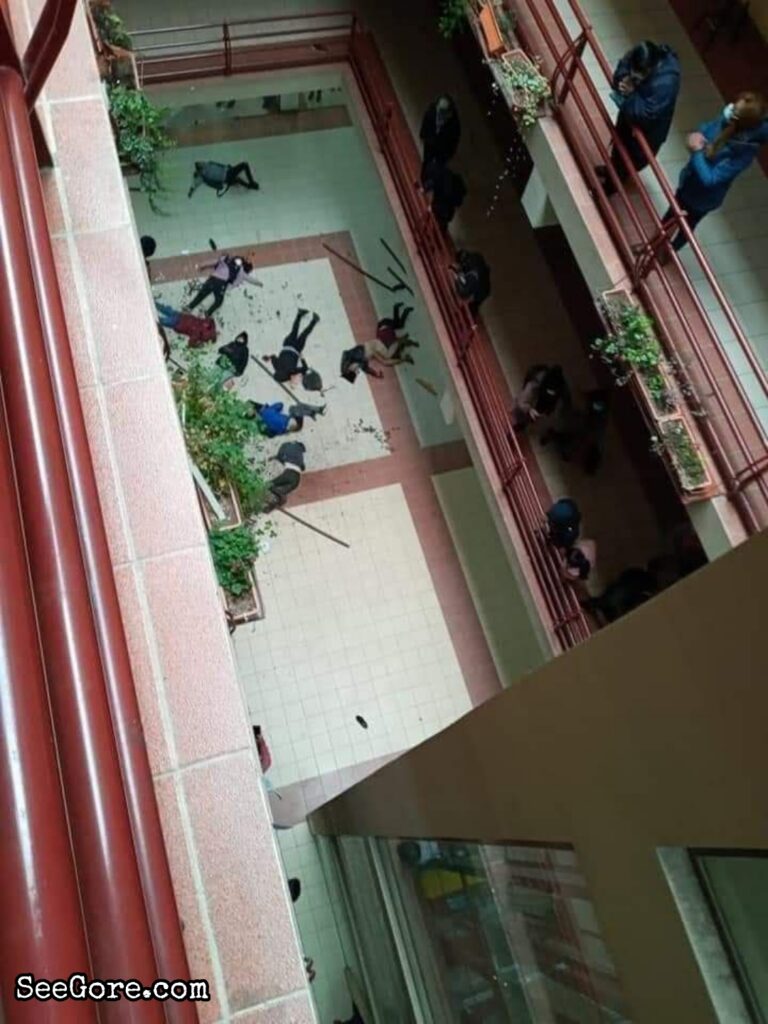 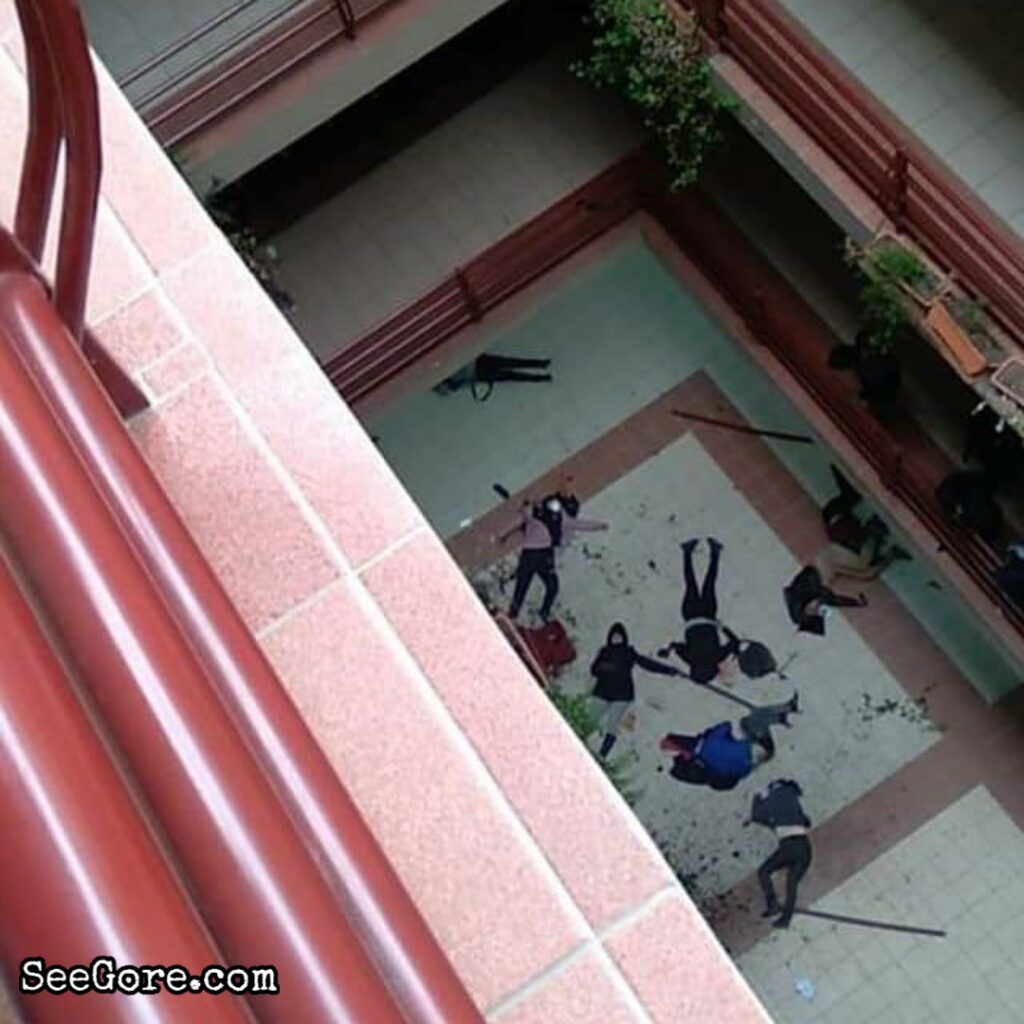 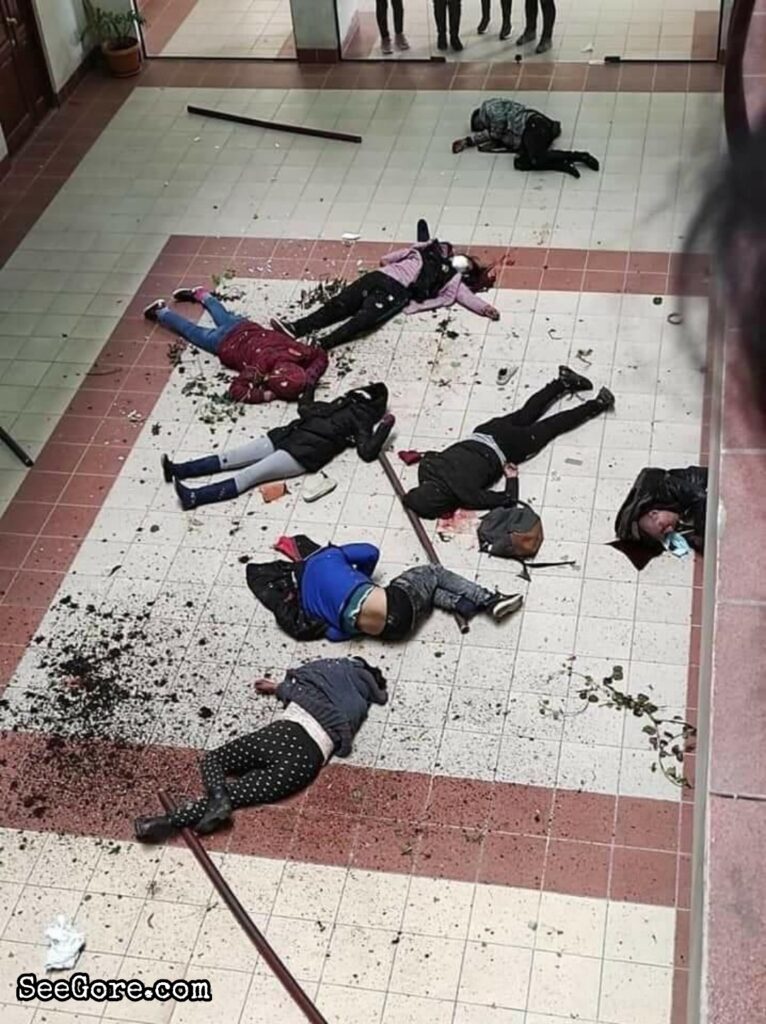 An investigation has been ordered into the incident and the woman who was rescued would be questioned to find details.

Those dead and injured are aged between 20 to 27.

“From this accident, seven have died and five are in a critical state, some of them stabilised,” health minister Jayson Auza said.

“Our deepest condolences to the people of El Alto and to the suffering families. We await the prompt clarification of the facts,” Bolivian President Luis Arce said on Twitter.

The bodies have been handed over to the families without delay for last rights, the police said.

my name is name
Reply to  Omar

so are you on this site fucking retard

What’s school for? Waste of time

The number one n
Reply to  faggot killer

Actually he isn’t its an automated random message system

Little pussy doesn’t understand irony?With the current conditions God has for one to go to heaven,all of us are going to hell.So unless you don t change,see you there

You sure about that ? I guarantee you that your ass wouldn’t be able to say it to someone’s face. You know why ? Because you’re a nobody, safely talking shit behind a screen and acting tough, but in reality you would get your head stomp like pulp and painting the concrete with your already damaged brain.

Tell him how you really feel 😂

THOSE 2 BITCH FIGHTNING how cause that.

and SAME BOTH BITCH dint fall.

Nop, the girl on the right did fall. She’s the one with red/wine jacket

it would’ve been good if they fell

This is honestly just sad

They had hopes and dreams and were studying to be great human beings. So sad

No need to be so mean towards my country ouch, if u were aware of the context u wouldn’t think that way lol

They deserve it UWU

That was EPIC! Dude, did you see the guy in the black hood that’s faced down? Look at the blood on the floor around his head area. Dude smashed his face so hard into the ground, that his eyeballs probably exploded. Lol!

Not quite up to the gore/body impact smush level of the WTC jumpers but close enuf an approximation and an accurate observation. The most excellent examples were videotaped back in the era of Saddam Hussien’s rule in Iraq. Saddam’s two sons Uday and Usay were fond of tying enemies down onto the ground and rolling a steamroller over their prone bodies thus reducing them to an exploded grease-spot on the ground. Shame there are not vids of this on this site.

i love the short debate

people just need to cope harder this is a gore website lol, how did u not feel like a complete retard typing that lol just because its a gore website doesn’t mean jerk off to it kike

Hopefully some crackers died too lol

I mean, she died. Isn’t that enough? It surely isn’t their fault that #1 the railing was old and likely faulty, and #2, why was an entire class waiting outside of the lecture hall? The teachers should have called them in as soon as they got rowdy. No one deserves anything for simply horsing around with their friends. Guess no one understands what an accident is. It was EVERYONE’S weight on it, not just hers. Wake up and smell the humble pie.

Definitely a win for Bolivia. Those cry baby maskers deserve the fall….

If only someone caught blue jackets, he almost made it!!

thats what i was thinking! ;(

They will be probably curse that unversity

The fact that you can see the blood leaking out of their head is sad. I hope they are in a better place

Am I the only one who counts 8 dead bodies?

I’m guessing one of those lived? Maybe they actually hit one of the other students and broke their fall, for lack of a better choice of words… It’d be amazing to know any of the ones who fell all the way survived.. it’s honestly amazing more people didn’t fall.

its actually better if they die, otherwise they will just still suffer with disabilities and continue to live in this horrible world

Shiit, that girl in the light blue jacket must be grateful as fuck that someone pulled her up

Sell all kinds of drugs(Opium/Heroin/MATM/MDMA/Morphine/Marijuana/Cocaine,etc.)
Sell ecstasy aphrodisiac rape(GHB/Triazolam/Ketamine,etc.)
It can be safely and covertly transported to all parts of the world.
In addition, recruit regional agents.
Contact email : [email protected]

One would think College Level students would know better than congregate en-masse on a raised walkway with a minimal safety railing. Then again the building itself was obviously constructed using shoddy (cheap) materials and incompetent workmanship. Probably obtained the concrete and rail anchors from China.

me when someone is shotting me down in fortknight gg

Fools, they deserved it. Isn’t it silly to be gathered with a lot of people in a place where you can see an accident?

Honestly a buncha dumbasses. Why cram and stand against a balcony in the first place? Deadass got a whole Billie Eilish concert on one balcony smh.

yall kinda weird ngl i mean i look at gore but yall rlly commenting on who shouldve died and who shouldnt on a tragic event??damn thas crazy

I count 8 bodies on the ground, so I suppose 1 person actually lived after falling 😳

Looks like the amount of retarded people in this planet are now reduced!

The kid in the blue with his backpack still on was holding on but no one saved him really sad. One of the students face was smashed.

shitskins fell from a high place.

let the bodies hit the floor

They didn’t have any crashpads or Shockwave. L

Back to
log in
wpDiscuz
92
0
Would love your thoughts, please comment.x
()
x
| Reply